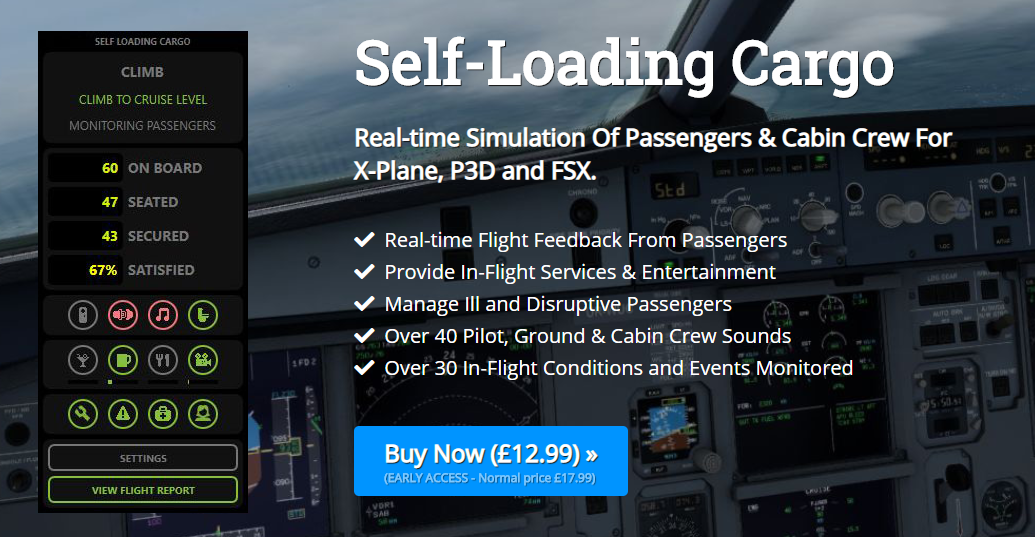 A brand new product has been released by new developers lanilogic, which is something of an fspassenger style add on for the simulator. Built to replicate the passenger experience on the aircraft, SLC was released today with a early release price of £12.99 to reflect the fact the product is still in development instead of £17.99. I trialled this out on a short 1 hour hop from Athens to Rhodes this afternoon, here are my initial thoughts on the product:

The interface is very easy to use, simple but effective design with all the information and buttons displayed on one window located on top of the simulator window running separately. I must say the fact you cannot minimise the window is a little bit of an issue, luckily I have two screens so was able to move over to the other screen during take off and landing but it can be distracting if you are using just one screen. You have the ability to select the sounds you want to hear and the volumes in a separate menu, I would recommend turning them down before using the product. I don’t agree with being able to hear the cabin through all phases of the flight from the cockpit, while you would hear the occasional noises from the cabin you wouldn’t hear it to the extent the program simulates so I switched these sounds off.

More about the sounds, the default packs cabin announcements appear to have been recorded by a child/teenaged girl which is rather off putting and being honest ruins the immersion of the product. Furthermore the captains PA’s are repetitive with the same sentences used for example “we are not anticipating any delays”  used both in the before take off and cruise PA along with the descent PA. Then the captain goes on to mention about keeping the aisle clear of baggage during the flight, something totally unrelated with the flight decks duties so rather irrelevant. During the descent PA he goes on to mention handing your rubbish in, fastening your seatbelts and switching off mobile devices. Again something not related to the flight decks duties, Cabin Crew prepare the cabin for landing would of been suffice.

I used the FSLABS A320 for this flight and unfortunately the landing lights logic did not work. So after lining up on the runway and switching the ambient music off, my satisfaction score started to plummet as i was “taxing to quickly”  and had a “taxi delay” because it had not realised I was departing. This was soon fixed as soon as the wheels left the ground, with a captain’s recording of “positive rate, gear up” which was a nice touch. However at 1000ft i received another notification saying “14 passengers need the toilet” . Well tough luck your staying seated till its safe to move, i’m trying to fly an aircraft! Then at 1400ft another notification came through saying 4 passengers are thirsty. Again, not on the list of priorities. This was a really unrealistic part of the program, and frankly im not too fussed if a passenger has used the toilet during the flight ( another notification you get on the display )

I started the drink service as soon as the seatbelt sign was off, this service was not completed before we started our descent into Rhodes. During the service passengers were complaining that they were hungry, but the interface only allows one service at a time. After switching the seatbelt sign on for descent the bar service continued, and then i received a thumbs down because 32 passengers needed the toilet. Does the program expect me to enter a hold till every Tom, Dick and Harry has had a pee ? During the descent the amount of passengers needing the toilet, thirsty, bored, hungry, fed up continued to rise. Again doI enter a hold until everyone is satisfied then land? This is a real issue with this product, something I don’t particularity understand the logic behind.

On final approach I got a thumbs down for no food service, unachievable since the program didn’t complete the drinks service during the cruise and irrelevant during final approach! Using auto brake 1 on landing I received a negative G force thumbs down, something I disagree with as it’s normal procedure. However your landing rate appears in the program which again is a nice touch and good part of the application. After all the passengers have disembarked you have the opportunity to view the flight report listing all the positive and negatives of your flight along with the passenger rating. I received and “F” rating along with 59.8% however as mentioned above, the variables were out of my control and all down to the program so I would love to know how you achieve that 100% rating!

Reading the website the technical, medical and crew issues you can experience during the flight can cause a divert. I assume this is randomly generated as there is no option to turn this off in the menu ( something i think there should be ) If this is correct, this software can’t be used while flying for a virtual airline where diverts are not allowed. I feel like I am being rather negative on this product, however I am judging it based on my own experiences as someone who works in the aviation industry, and flies for an airline. The variables and PA’s in my opinion should reflect this as this is what the software is designed to do, mimic a virtual cabin from the program. There is a fine line of the captains responsibilities and the cabin crews responsibilities, and I believe this needs to be looked into by the developer and changed for the next release. I have never once heard a captain as passengers to hand their rubbish in and keep the aisles clear….

I look forward to trialling this software on a longer flight, hopefully it will work better with the services and what not during a longer flight. Personally I would say this is an okay piece of software, but has a long way to go until its up to the mark on the realism and usability factor with all aircraft within the simulator. Great initial work by lanilogic, however I would suggest holding off purchasing the product until a few more updates and fixes from the developers.

This review was written by Ryan Lear and reflects his opinions on the above product only. It does not reflect the opinion of UK virtual.

Cover image courtesy of the developers website which can be found here : https://slc.lanilogic.com/