I’ve been pining for years over the death of FSPassengers when I moved to P3D and its developer didn’t move it with me. It gave flying an immersion that made the whole process seem much more real, more involved. Well, there’s a new kid on the block, and so far, it looks like it will far surpass the level that FSP took us to!

Enter Self-Loading Cargo, the creation of FPVSteve, a Software developer from the North. What he has created is an innovative addon to immerse you fully into your flight. 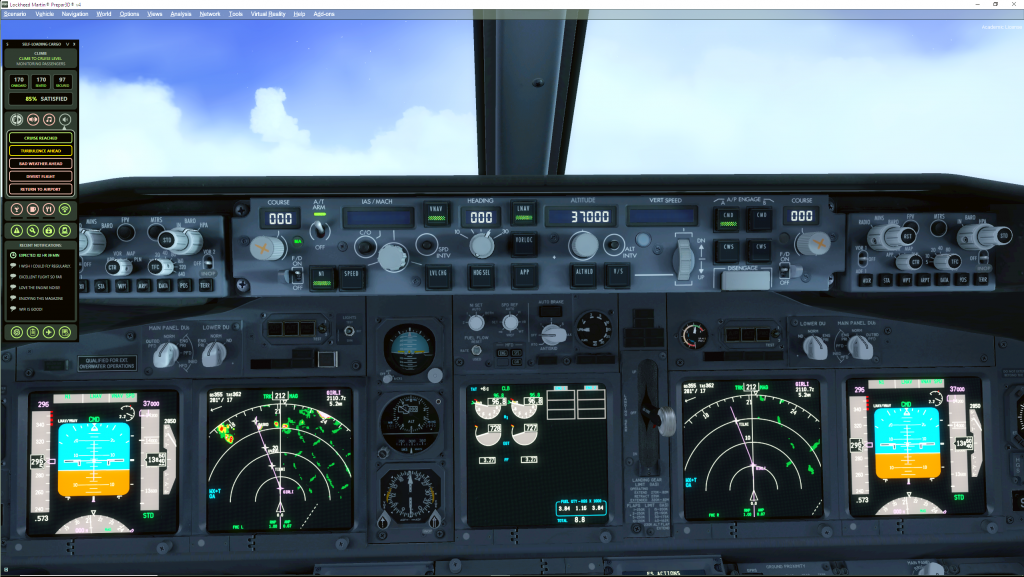 The applet sits unobtrusively in the corner, and you manage most everything from that little interface. You can also drag it onto another screen if you wish, but I found it was much easier to control things when it was there in the cockpit view. There are a couple of additional windows which open to give you a view of the cabin, and what’s going on in it in real-time.

The first is a passenger manifest which shows you a list of your passengers, with randomly generated details and luggage parameters. Currently these don’t do much but in future updates, they will be more relevant.

The second screen is one you’ll use a lot more. It’s a top-down view of the cabin and all the passengers adn their movements, satisfaction rating, hunger, thirst, health, anxiety and boredom levels. It will show who needs the toilet, who has had too much to drink, and what each passenger is fdoing at the time. You need to keep them all happy to keep your flight rep up as you go.

Most of what you do will have an effect on the satisfaction level, so don’t linger on stand too long, or pull back on the stick too sharply, you’ll lose that rep fast! Managing the satisfaction levels of the passengers becomes a bit of an obsession, but adds tremendous immersion. You can offer onboard wifi or movies (not both), and you can serve food and non-alco and alco drinks. In future updates, you’ll be able to do a lot more like giving out pillows to individual passengers, interacting with crew, etc. At the moment, you can also set fully auto, where the crew manage each stage and you concentrate on flying the plane, or you can have a lot more control, were you have to open and close doors, instruct the crew to secure the cabin for landing, take their seats, etc.

You also have to manage the usual things like landing lights on and off below 10000, good landing rates, etc.

Audio is great, with captain announcments recorded for most occurances, and music during boarding and deboarding, hover sounds during turnaround, etc. There is also an option to record your own sounds and have different audio sets for each plane/airline you fly.You can also create your own cabin layouts for planes not covered by the defaults (it includes much of the usual planes flown in the sim though). Creating layouts is a little fiddly, and easy to get wrong but the option is there. Future updates should include a graphical alyout editor.

So in conclusion, I can highly recommend this bit os software. It’s a game changer, and only £13 at the moment!