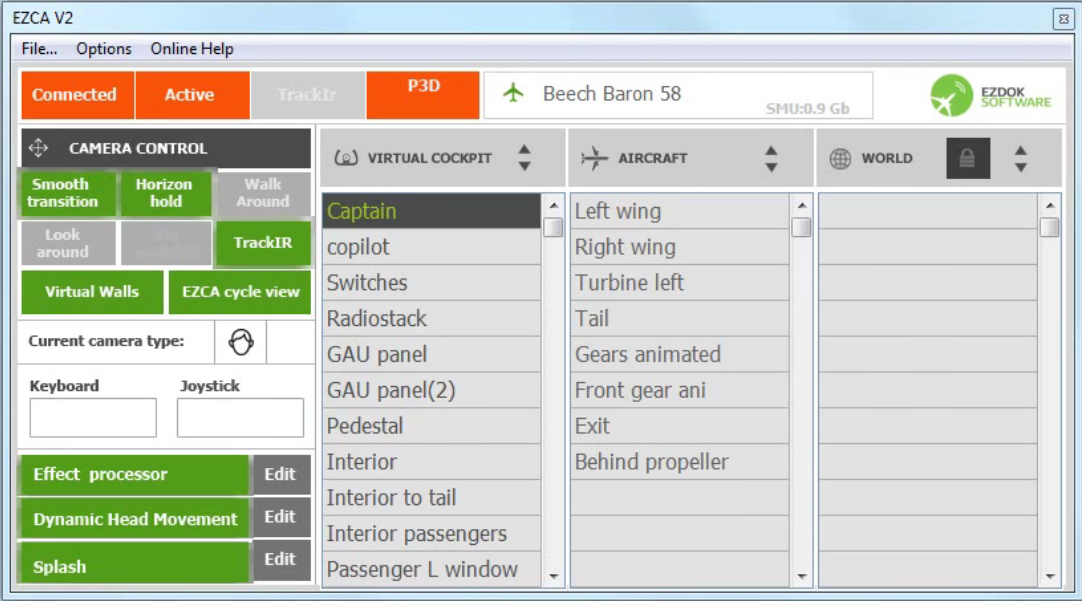 It’s like Marmite. Some people love it. Some people hate it. I confess now that I think EZDok was a great add on. For me it worked and it worked very well. there was nothing else out there. Now it did come with a few problems. It wasn’t easy to set up or modify. It took time and could be frustrating. Added to that there seemed to be little support. One last thing – it did drop errors in your system log. These never caused me any problems … but they were there.

So right at the start of 2017 we have EZDok 2. Hot on the heels of ChasePlane, it has obviously been in the making for a long time. I suspect it’s one reason why Chaseplane was publicly released in Alpha stage – I would expect more and more developers to be relieving us of our cash in the early stages of development and getting us to find all the bugs.

I didn’t quite jump on the ChasePlane bandwagon as my EZdok was so sorted and it didn’t support TrackIR. With the release of EZDok2 for only $12 to previous users, I thought I should give it a look.

Even I was surprised. It works (so far) flawlessly from the word go. installation is the usual messy business with the Flight1 wrapper but there was no problem. You must ensure earlier versions of EZDok are disabled. The config tool runs automatically. You set up your joysticks and fly.

It’s very very good. It comes wih a whole set of profiles with pretty mush every “standard” view you can think of. The view transitions are silky smooth. the TrackIR integration is seamless. The interface is intuitive to operate. There is a subtle “Horizon Hold” feature that sort of halves the bank angle you’re viewing and is remarkably good for keeping the airport visual.

So it does views … but perhaps the most impressive feature for me, is the dynamic movements. These were good on EZDok1 but boy, did you have to work at it. These are all set up and ready to go. Engine vibration. Gear, flap and spoiler buffet, ground roll, splash effect and a very impressive progressive turbulence set that increases shake with increasing turbulence.

All the settings can be easily tweaked if you want but I have made very few changes – oh and the system errors are gone. I see no hit in terms of VAS or frame rate.

So what doesn’t it do? Well at the moment, it doesn’t do a fancy cinematic drift around the airplane. Other than that ……..

The guy that produces EZDok is just that. One Russian guy. At the moment, there’s not much of a manual. A couple of the adjustments you make in the menu system work well … when you work out how to do it … and he’s obviously swamped in terms of support (people largely having difficulty with installation – mostly because they haven’t read things properly).

BUT ……. EZDok 2 is very good. I haven’t played with ChasePlane in detail but I understand that is very good too (although there seem to be plenty of bugs still to iron out). You now have options. If you have version 1, get 2 – It’s too inexpensive not to.